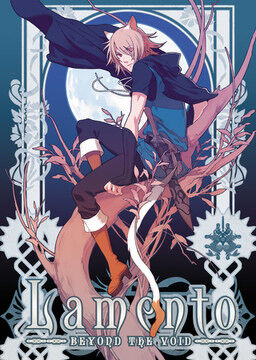 The game takes place in a fictional world inhabited by Ribika (who look like humans but have cat ears and tails). Their world has fallen into dark times -- a mysterious void has made some places (and even animals) impossible to touch, causing major food shortages. A strange and deadly disease that has killed off a large percentage of the female Ribika population is also spreading.
The hero, Konoe, exists in this miserable world, living alone in the starving village of Karou who have turned to cannibalism. The story begins with Konoe in Karou, where he suddenly begins to see horrible dreams and strange marks appear on his body. This is believed to be a curse so Konoe heads off to Ransen (the big city) in order to heal his body...
[From: aarinfantasy]

Lamento, its characters, places, objects, and official drama CDs (and anything else I've forgotten to include) are all the property of Nitro+CHiRAL. Neither I nor any who edit this wiki lay any claim to owning it. This wikia WILL contain spoilers!!

The vast world in which the events in Lamento take place.

Various lore is learned in Lamento, some are legends and others are fact.

Lamento- Beyond the Void- has been adapted into several book forms such as a manga series, a novel, and some official visual fan books. Unfortunately, none of these have been officially published in English, and only a small fragment of these have been translated by fans.

Community content is available under CC-BY-SA unless otherwise noted.
Advertisement